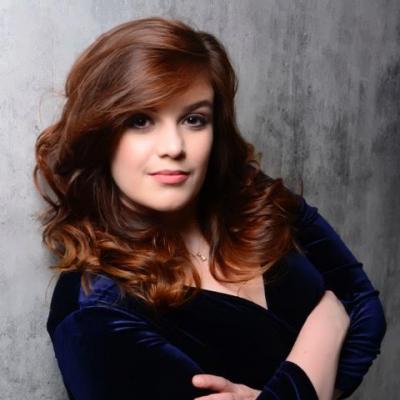 Rebecca studied at the Royal College of Music as an RCM Scholar supported by the Marjorie Tonks award and a Pidem award. Roles at the RCM include The Governess in Britten’s The Turn of the Screw, Semele in Cavalli’s L’Egisto and Madame Silberklang in Mozart’s Die Shauspieldirektor in scenes, as well as The Raver in a new opera in association with Tête a Tête (On False Perspectives by Josephine Stephenson).

Rebecca was a Christine Collins Young Artist with Opera Holland Park in 2013, and in 2015 played Una Conversa in Puccini’s Suor Angelica. Rebecca also played Victorian in Will Todd’s Alice’s Adventures in Wonderland at the Linbury theatre, Royal Opera House. Recent solo performances include Schoenberg’s Pierrot Lunaire (RCM Amaryllis Fleming concert hall) and Stockhausen’s AM HIMMEL WANDRE  ICH (Germany/UK). This summer Rebecca undertook the role of Zerbinetta in Ariadne auf Naxos by Richard Strauss at Berlin Opera Academy, as well as performing at the Aix-en-Provence festival and with Bergen National Opera.

Rebecca also sings with the Monteverdi Choir, including touring Bach’s St Matthew Passion and Mendelssohn’s Lobesgesang over Europe. She appeared with them as a Fairy in Mendelssohn’s A Midsummer Night’s Dream, along with the LSO, at the Barbican and broadcast on BBC Radio 3. Rebecca was nominated for the Joaninha Award by Sir John Eliot Gardiner in 2016. She recently completed the Opera Works course at English National Opera.