London Concert Choir and chamber choir Canticum perform the pivotal role of the chorus in Andrew Litton’s condensed concert version of Gershwin’s Porgy and Bess, which includes all the best-loved songs – ‘Summertime’, ‘Oh I Got Plenty o’ Nuttin’, ‘Bess, You Is My Woman Now’ and ‘It Ain’t Necessarily So’.

Gershwin’s ‘American folk opera’ was inspired by DuBose Heyward’s novel Porgy about a black community on the waterfront of Charleston, South Carolina. In 1934 the Gershwins and Heyward rented a beach house near Charleston to immerse themselves in the culture of the local people, who had kept much of their West African heritage. While Ira and Heyward wrote the words, George composed in a huge variety of musical idioms: folk, popular song, spirituals and jazz, as well as operatic arias.

UK baritone Rodney Earl Clarke brings his wide experience of opera and musical theatre to the role of Porgy. Bess is sung by Nigerian-American soprano Francesca Chiejina, a soloist at the BBC Proms in 2021. Gweneth Ann Rand sang Serena for English National Opera and Ronald Samm has appeared in the title role of Verdi’s Otello.

Opening the concert, the energetic overture to the hit musical Girl Crazy features the well-known songs ‘Embraceable You’, ‘I Got Rhythm’ and ‘But Not for Me’. Copland’s attractive arrangements of American songs cover a wide range of themes and styles; the Shaker hymn ‘Simple Gifts’ may be familiar from his ballet Appalachian Spring.

London Concert Choir had its 60th Anniversary in 2020 while Canticum is now in its 30th season. Both choirs display remarkable musical versatility and expressiveness under the leadership of Mark Forkgen, who has just celebrated 25 years as Music Director of LCC. Southbank Sinfonia is a leading orchestral academy for young graduate professional musicians from across the world. 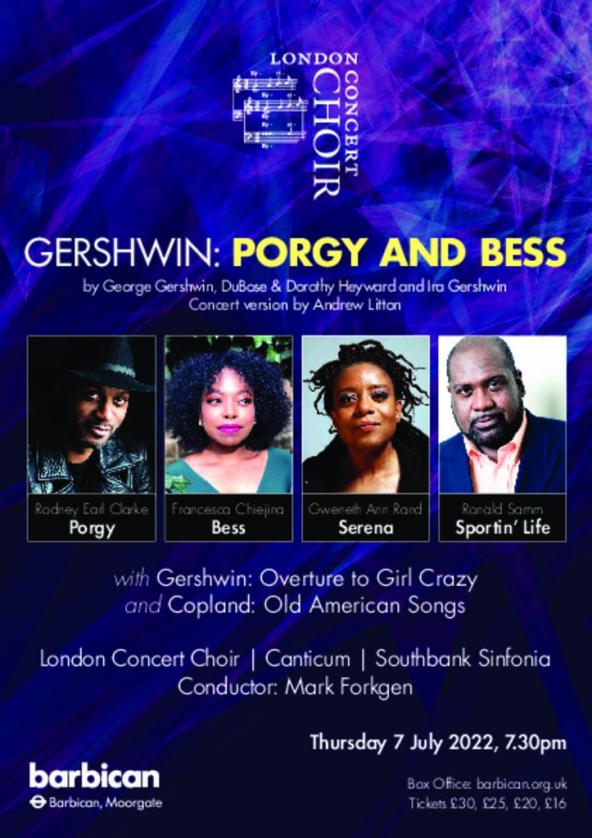