Monday 11 June will be a very special night at the Barbican as London Concert Choir celebrates the centenary of the world’s oldest independent airforce.  Subtitled ‘100 Years of British Music’, the concert begins with works by Parry, Walton and Britten and stirring music from the Central Band of the RAF.  These are followed by the world premiere of a major choral work by the baritone and composer Roderick Williams, commissioned to mark the Centenary and to provide a musical legacy for the event.

Per Ardua ad Astra - Through Adversity to the Stars sets a wide range of aviation poetry relating to milestones in the Service’s history. The movements are linked by poems spoken by BBC journalist Sophie Raworth and actor Martin Shaw, and the Hall will resonate to the sounds of iconic aircraft from 1918 to the present. Words and music movingly combine to depict the joy and exhilaration of flying and the courage of the aircrews.

Sophie Raworth’s grandfather, Edwin Llewellyn Raworth, joined the Royal Flying Corps in 1917 and so became one of the first pilots in the RAF 100 years ago. Sophie says that being part of the RAF 100 celebrations means a lot to both her and her family.  Martin Shaw is a keen pilot. In 2010 he presented the BBC documentary Dambusters Declassified, in which he took to the skies to retrace the route of the famous 617 Squadron Dams raid and to shed new light on the story.

Proceeds are being donated to charities including the RAF100 Appeal.

The Central Band of the Royal Air Force appears by permission of the Air Force Board of the Defence Council. 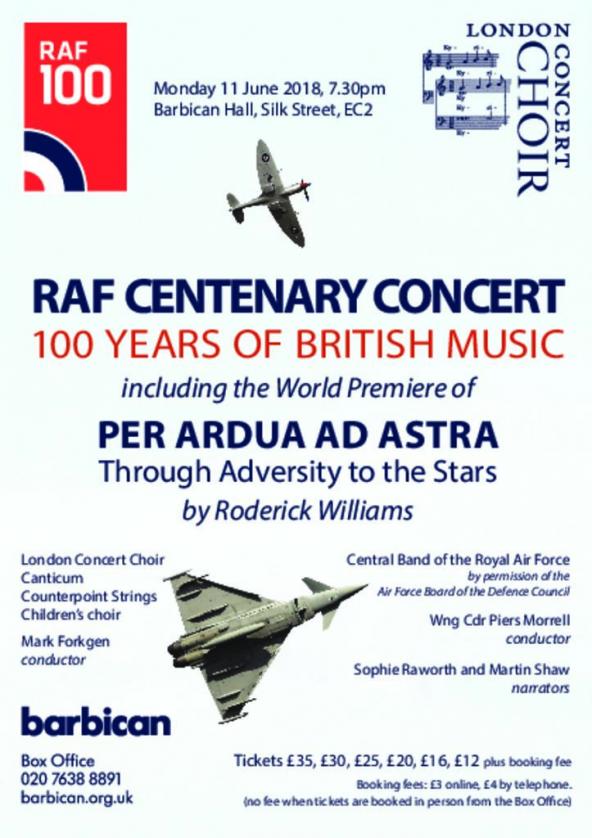