After the phenomenal success of The Creation, premiered in Vienna in the spring of 1798, the librettist, Baron Gottfried van Swieten, lost no time in proposing another oratorio text to Haydn, again with a British source: his own drastically abridged adaptation of James Thomson’s pastoral epic The Seasons, which, since its publication in 1730, had rapidly become one of the most popular of all 18th-century poems. Jettisoning most of Thomson’s abstract moralising, van Swieten shifted the scene to Haydn’s native Burgenland and in a spirit of unsullied Enlightenment optimism omitted tragic details such as the wanderer frozen to death in a snowstorm.

The lordly, self-opinionated Baron was certainly no poet. Time and again he dulled and flattened Thomson’s brilliant and original imagery, compounding the problem further with the English ‘back-translation’ of his German text (to maximise sales The Seasons was actually issued in German, English and French – the first-ever trilingual publication!). But, working closely with the composer, he was often shrewd in his choice of which details to omit and which to include. In many ways the finished libretto was right up Haydn’s street: akin to The Creation in its celebration of an idyllic, divinely ordered world, yet embracing an even wider range.

Haydn, though, worked on The Seasons with increasing reluctance, protesting that he was too weary and that the libretto was banal and prosaic by comparison with The Creation. Although the Baron bullied and cajoled him into finishing the oratorio, it has suffered from just about the worst press any composer has given his own music.

Haydn repeatedly grumbled that he’d rather be at work on the more exalted subject of The Last Judgement (a project that, tantalisingly, he was never to realise). Still smarting at superior critics’ attacks on The Creation’s animal imitations, he derided the croaking frogs and chirping crickets in ‘Summer’, so delightful to us, as französicher Quark (‘Frenchified trash’) – ie, the kind of tone-painting found in the opéras comiques of Auber and other French composers. When he came to set the words ‘O toil, O noble toil’ in ‘Autumn’, he muttered that while he had been an industrious man all his life, he would never have dreamt of setting ‘industry’ to music; and he summed up the relative merits of the two oratorios by remarking mordantly that while the solo voices in The Creation were those of angels, in The Seasons ‘only [the peasant] Simon speaks’. Yet for all Haydn’s strictures, van Swieten’s text gave him plenty to fire his imagination; and he responded with music of unquenchable vitality and freshness of observation.

First heard in the Palais Schwarzenberg in Vienna on 24 April 1801 “with the same unanimous approval as The Creation” (Haydn’s words), The Seasons is a joyous evocation of the world in which the composer, a master-wheelwright’s son, had grown up.

Though God is invoked directly in the fugal choruses that close ‘Spring’ and ‘Winter’, The Seasons is the least solemn, most hedonistic of oratorios. Essentially a series of lovingly painted frescoes, it epitomises Haydn’s final creative period in its juxtaposition and fusion of the popular and the sublime, pastoral innocence and the most sophisticated orchestral and harmonic language. Indeed, like Die Zauberflöte, Mozart’s great celebration of Enlightenment values, The Seasons effortlessly incorporates a diverse array of styles, from Viennese Singspiel [music drama] to the exhilarating fugal choruses that reflect Haydn’s encounter with Handel’s music in London. 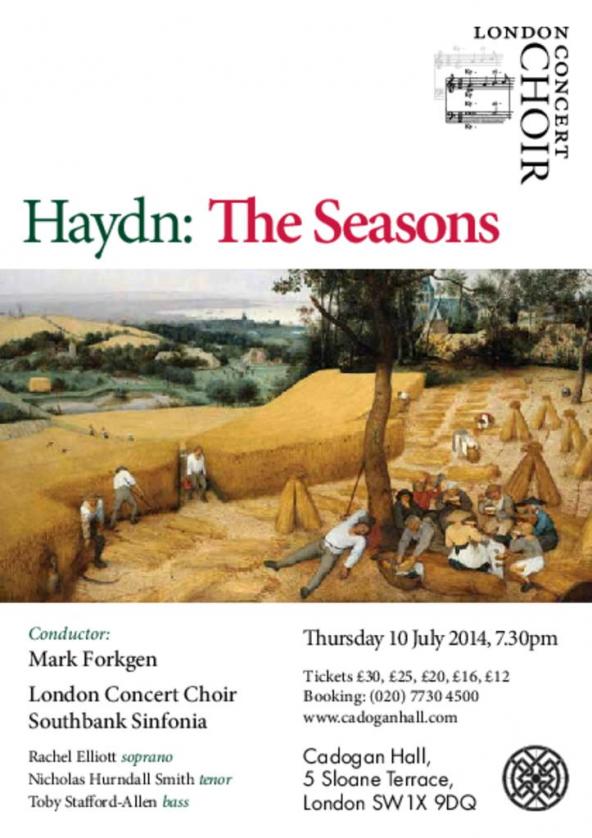 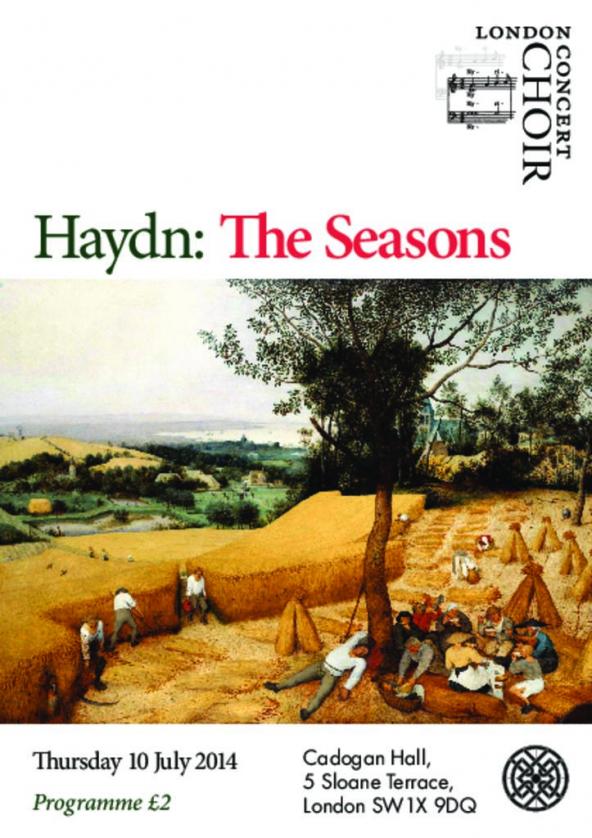