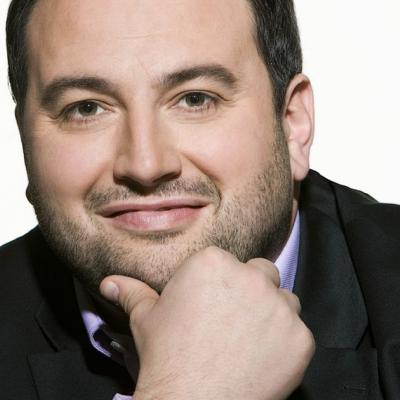 Wynne Evans was born in Carmarthen, South Wales and studied at the Guildhall School of Music and Drama, and the National Opera Studio, London.

Highlights on the concert platform include Beethoven’s Ninth Symphony for RTE, Elgar’s The Dream of Gerontius at the Welsh Proms in St David’s Hall, Tippett’s A Child of our Time in France, La mort d’Orfée with the Hanover Band; soloist in a special televised performance of Karl Jenkins’ Mass for Peace – The Armed Man, conducted by the composer in celebration of his 60th birthday; Verdi’s Requiem at the Royal Albert Hall, Handel’s Messiah at St David’s Hall, Cardiff and a recital at the Wigmore Hall.  Wynne is soloist on three ‘Here Come the Classics’ CDs with the Royal Philharmonic Orchestra and has recorded Salome for Chandos.

From 2009 Wynne has starred in the advertising campaign for the price comparison website, Gocompare.com.  In 2004 he responded on behalf of the Welsh Rugby Team to the New Zealand Haka, and has since sung at over 20 internationals.  Future plans include:  Die Entführung for WNO, The Love Of Three Oranges and Capriccio for Grange Park Opera, and Ariadne Auf Naxos for Chandos.

Wynne is a trustee for The Elizabeth Evans Trust, an Ambassador for St John Cymru Wales and a Professor at the Royal Welsh College of Music and Drama.  He was awarded the MStJ in 2008.