Verdi’s Requiem grew out of a project which he initiated in 1868 in order to commemorate the death of Rossini. His intention was to encourage the foremost Italian composers of the day to collaborate in composing a setting of the Requiem Mass, by each contributing a movement. Verdi himself immediately set to work on the final movement, the Libera Me.

Although such ties of friendship as existed between Verdi and Rossini were only slight, Verdi felt the latter’s death represented a major event for Italians, not least because this was the period immediately before the creation of an independent and unified Italian state. “Rossini’s reputation,” he wrote, “was the most widespread and the most popular of our time; it was one of the glories of Italy. When the other which is comparable with it, that of Manzoni, exists no longer, what will remain for us?”

Despite Verdi’s best efforts, his plan fell through. By then he had already completed the Libera Me movement, but during 1869-70 he left the Requiem project aside, turning his attention instead to Aida, which he completed in 1871. His next composition was a string quartet, which was finished in March 1873. Two months after this came the news of Manzoni’s death, which came as a terrible blow to the composer.

Alessandro Manzoni (1785-1873) had been the leading Italian writer of the century, with an international reputation. To his publisher, Giulio Ricordi, Verdi wrote, “I shall not go to Milan tomorrow; I could not bear to be present at the funeral. I shall come later to the grave, alone and unseen. I may have a proposal to make to you as to how his memory should be honoured.”

Verdi determined that his previous Requiem project, including the existing Libera Me movement, should be the basis for a new work. But there was an important difference. Now he would compose the whole score on his own. The first performance took place on 22nd May 1874, the first anniversary of Manzoni’s death.

Muted cellos play a slow, descending phrase, which is taken up by the remaining strings as the chorus enters with a monotone chant. A beautiful violin phrase introduces the ‘Lux aeterna’, and there is a new, unaccompanied vocal melody for ‘Te decet hymnus’. With the Kyrie, the soloists enter in turn, on an expansive and lyrical theme, before combining with the chorus in an ensemble of both beauty and fervour. The closing phase returns to the hushed chant, ‘Christe eleison’.

This is the longest movement, comprising several linked sections. The imagery of the day of wrath is immediately generated by the orchestra, with four shattering G minor chords and a wildly swirling theme. The chorus responds with terrified cries, while the off-the-beat strokes of the bass drum complete the picture of
the Last Judgement.

As the music subsides, four trumpets in the orchestra are combined with four in the distance, rising to a climax at which the full ensemble joins for the ‘Tuba mirum’. But the impressive volume breaks off suddenly, and the solo bass enters pianissimo with ‘Mors stupebit’, accompanied by a march rhythm in the strings, emphasised by the bass drum.

Day of wrath, that day
shall dissolve the world in ashes;
so spake David and the Sybil.
How great shall be the trembling
when the Judge shall come,
to weigh all things exactly.

The trumpet spreading wondrous sound
Through the tombs of every land,
Summons all before the throne.
Death and nature will be astounded,
When all creation rises again
to answer to the Judge.

The ‘Liber scriptus’ is a passionate solo for the mezzo soprano, occasionally contrasted with quiet interjections of ‘Dies Irae’ from the chorus, and later from the orchestra too. This heralds the fierce return of the intensities of the opening music, which in turn subsides as the mezzo begins the trio, ‘Quid sum miser’, with the soprano and tenor, plus an obbligato bassoon. This delicate trio leads into the contrast of ‘Rex tremendae’, which begins imposingly with the chorus basses, moving through to ‘Salva me’ for soloists and chorus. Here the pleading vocal line ranks among Verdi’s finest inspirations.

The book of words shall be brought forth,
in which everything is contained
whereby the world is to be judged.
Therefore when the Judge is seated,
all things hidden will appear,
nothing shall remain unpunished.

Day of wrath, that day
shall dissolve the world in ashes;
so spake David and the Sybil.

What shall I, a wretch, say then?
To which protector shall I appeal,
while even the righteous are hardly safe?

King of tremendous majesty,
who freely saves those deserving it,
save me, O fount of mercy.

A gentle duet, ‘Recordare, Jesu pie’, is sung by the two female soloists, followed by the tenor’s ‘Ingemisco tanquam reus’. At the words ‘Inter oves’, a solo oboe alternates with the vocal line, creating a certain tension and moving towards a climax, a proud cry on a sustained high B flat: ‘Statuens in parte dextra’.

Remember, merciful Jesus,
that I am the reason for Thy journey;
lest Thou lose me on that day.
Seeking me, Thou didst sink down wearily;
Thou hast redeemed me by enduring the cross;
Let not such travail be in vain.
Righteous Judge of retribution
make a gift of absolution
Before the day of reckoning.

I groan as one guilty,
my face blushes with guilt,
spare the supplicant, O God.
Thou who didst pardon Mary Magdalen
and didst listen to the thief,
hast given me hope also.
My prayers are unworthy,
but good Lord, be kind
and let me not burn in eternal fire.
Grant me a place among the sheep,
and separate me from the goats,
setting me at Thy right hand.

The bass solo, ‘Confutatis maledictis’, inspired one of Verdi’s most noble tunes, but  its progress is halted by the return of the ‘Dies Irae’ music, which this time receives a full recapitulation. The sequence ends with the ‘Lacrymosa’, which is introduced by the mezzo and the other soloists, while the chorus add a tearful figure of rising semitones.

When the wicked are confounded,
and consigned to the bitter flames
call me to be with the blessed.
Kneeling in supplication I pray,
my heart is contrite as ashes,
take into Thy care mine end.

Day of wrath, that day
shall dissolve the world in ashes;
so spake David and the Sybil.

That day will be full of tears,
when from the ashes arises
guilty man to be judged;
Spare him, therefore, O God!
Merciful Lord Jesus,
give them rest! Amen.

The Offertorio is scored for the four soloists and orchestra. It begins with a warmly lyrical theme, but at ‘Quam olim Abrahae’ the music becomes altogether more vigorous. This makes the tenor’s ‘Hostias’ seem the more beautiful in its hushed lyricism. A reprise of ‘Quam olim Abrahae’ is followed by the return of the initial cello theme, now sung as a vocal unison. There is a brief, but highly effective, orchestral postlude.

Lord Jesus Christ, King of glory,
deliver the souls of all the faithful
departed from the pains of hell
and from the deep pit.

Deliver them from the lion’s mouth,
that hell may not swallow them up,
and they may not fall into darkness:
but may the holy standard-bearer,
Michael, lead them into the holy light;
as Thou didst once promise
to Abraham and his seed.

We offer sacrifices and prayers to Thee,
Lord, with praises.

Do Thou receive them on behalf of those souls whom we commemorate this day:
grant them, O Lord, to pass from death
into life; as once Thou didst promise
to Abraham and his seed.

Deliver the souls of all the faithful
departed from the pains of hell
and from the deep pit,
grant them to pass from death into life.

The Sanctus contains the most directly brilliant music in the work. Trumpet fanfares introduce the movement, which is constructed as a double fugue. The choral writing is light and animated, the orchestral parts virtuoso, the rhythmic vitality immensely impressive in its splendour.

Holy, holy, holy
Lord God of hosts.
Heaven and earth are full of Thy glory,
Hosanna in the highest!

Blessed is He that cometh
in the name of the Lord.
Heaven and earth are full of Thy glory,
Hosanna in the highest!

A peaceful Andante tune is sung by the female soloists in unaccompanied octaves, then repeated by the chorus. The soloists repeat the tune, now in the minor key, and the chorus develops the material further. When the tune returns for a third time, there is the addition of a flowing contrapuntal line played by three flutes.

Lamb of God, that takest away the sins
of the world, grant them rest.

Lamb of God, that takest away the sins
of the world, grant them eternal rest.

Verdi uses only three of the soloists in this movement: mezzo, tenor and bass. The mezzo has an opening recitative-arioso, which is answered by the dark chords which underlie the bass in the setting of ‘Requiem aeternam’. This conflict between images of light and darkness is eventually resolved by the appearance of a radiant lyrical theme, which dominates the remainder of the movement.

May eternal light shine upon them,
O Lord,
with Thy saints for ever,
for Thou art merciful.

The final movement reworks the material Verdi originally composed in connection with the ‘Requiem for Rossini’ project. The opening, which was conceived at that time, is immensely impressive: an urgent unaccompanied recitative for the soprano, followed by the hushed fear of the chorus. The soprano’s agitated ‘Tremens, factus’ suddenly brings a restatement of the ‘Dies Irae’ music, which in turn leads to the return of the soprano and chorus, unaccompanied. The soprano’s skill is taxed to the limit, as she moves up to a high B flat marked pppp, before returning to an even more urgent delivery of the ‘Libera me’. The chorus bursts in with a dramatic fugue, the soprano soaring above, and the music moves to a magnificent climax. This dies away, until at the end only the awe-struck whisper of the prayer remains.

Deliver me, Lord, from eternal death,
in that awful day:
when the heavens and the earth
shall be moved:
When Thou shalt come to judge
the world by fire.

I tremble, and I fear
the judgement
and the wrath to come.

Deliver me, Lord, from eternal death,
in that awful day:
when the heavens and the earth
shall be moved:
When Thou shalt come to judge
the world by fire.

Deliver me, Lord, from eternal death,
in that awful day: 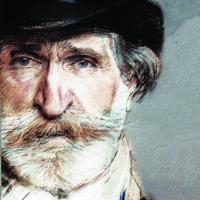