In May 1723 four wagons loaded with household goods trundled into the Saxon town of Leipzig. They were followed, two hours later and in two carriages, by their owner and his family. Johann Sebastian Bach, lately Kapellmeister to Prince Leopold of Anhalt­-Cöthen, had arrived to take up his post as Cantor at the Thomasschule and music director of the four Leipzig churches. He was to remain there for the rest of his life.

Bach’s first years in Leipzig were remarkable for his prodigious production of cantatas for the Sundays and holidays of the Lutheran liturgical cycle. In the 12 months from May 1723 at least 50 works were performed, nearly all of which were newly composed.

The musical highpoint of the year was Vespers on Good Friday, when a Passion oratorio, with a sermon between Parts One and Two, was given. That form had come late to Leipzig, the first performance having taken place in 1717. Bach’s predecessor as Cantor wrote a St Mark Passion for the Thomaskirche in 1721. Three years later, on April 7th, 1724, the new man presented his St John Passion.

It was not his first essay in this field. The official Obituary speaks of five Passions, believed to have been written between 1717 and 1731, but only two are known to have survived – the other being the St Matthew Passion of 1727.

For his first Leipzig Passion Bach had booklets printed, saying it would take place in the Thomaskirche. The town council, his employers, reminded him it was the turn of the Nikolaikirche to stage the event. Bach protested that there was not enough room for the musicians. The council stuck to its guns but paid for a flyer announcing the correct venue and provided sufficient performing space. It was the first of many confrontations between Cantor and municipality.

The St John Passion we are to hear tonight is the first version of 1724. Bach subsequently revised it several times, but reversed most of these changes for the final version of 1749. One of the reasons for his repeated revisions may have been the musical limitations of the text.

First, St John’s account of the Passion is not as varied scenically as St Matthew’s – for example it does not have the Last Supper or the Agony in the Garden. Second, whereas by 1727 the poet Picander had supplied a tailor-made libretto for the arias and reflective choruses of the St Matthew Passion, when Bach composed the St John Passion he had to adapt passages for these from several authors, in particular the poet and Hamburg councillor Brockes.

The first Leipzig Passion has a different balance between Gospel verses and poetic meditation from that of the second; however, whether or not Bach was making a virtue out of necessity, the absence of solo arias during the central trial scene adds considerably to its impact. And, as so often, Bach took an existing genre and raised it immeasurably in terms of dramatic power, orchestral colour and richness of harmony and counterpoint.

The work opens with a Prologue in the form of an awe-inspiring da capo chorus which contrasts Christ’s majesty (Herr, unser Herrscher) with the humiliation of his Passion and death (in der grössten Niedrigkeit). Over a relentless pedal bass, the strings rise slowly in tightly-knit semiquavers. Above them the woodwind wail dissonantly, prefiguring the crowd’s yell of Kreuzige! (Crucify!) in the trial scene. After a triple acclamation of the Lord the voices take up the semiquaver runs. A contrapuntal counter-subject follows, with the semiquavers now transferred to the instrumental bass. The original pattern soon returns and choir and orchestra move to a tremendous climax on a high G minor chord. The counter-subject is heard again, this time a semitone higher (Zeig’ uns durch deine Passion). The music falls dramatically to illustrate Niedrigkeit and gradually gathers strength on the phrase verherrlicht worden bist.

St John goes straight into the arrest of Jesus in the garden. In the first two interventions of the crowd, notice the accompanying instrumental semiquavers, ending with an arpeggio cascade – they will recur in three other numbers; also, the lower pitch of the second intervention, indicating awe of Jesus.

The arrest scene is punctuated by two chorales, the Lutheran hymns which would have been familiar to Bach’s congregation and in the St John Passion are set in such a variety of keys and harmonized with such daring. The scene ends with two arias separated by the briefest of recitatives. In themselves they are lovely  Von den Stricken meiner Sünden (From the bonds of my sins), for countertenor, is accompanied by weaving oboes and a bass which hastens upward, and
Ich folge dir gleichfalls (I follow you likewise), for soprano and flutes, is Bach at his most trippingly joyous – but they do slacken the momentum of the drama.

A long recitative Derselbige Jünger follows. The Gospel verses are set starkly in the St John – they lack the St Matthew’s nimbus of strings around Jesus – but to great imaginative effect (note in this number the contrast between denn es war kalt and the shiver on wärmeten).

In the hissing Bist du nicht seiner Jünger einer? (Art thou not one of his disciples?) Bach conjures up the nightmare of accusations coming from all sides.
Peter’s anguished tears (a sentence lifted from St Matthew’s Gospel) are conveyed by a lengthy succession of semitones and tritones above a chromatic scale in the continuo. There follows one of the most striking numbers in the work,
Ach, mein Sinn (Ah, my soul), an impassioned aria in F sharp minor for tenor
(one might almost say Heldentenor), characterized by dotted quavers and scurrying semiquavers. It offers no comfort and ends abruptly in a passage marked forte by the composer. A chorale reflecting on Peter’s betrayal, in which the word Böses (evil) is tellingly harmonized, concludes the first part of the Passion.

Repeated soprano Es in the opening chorale are a clarion call at the resumption of the action. We immediately enter the most dramatic sequence of the St John Passion, the exchanges between Pilate and the mob. To the procurator’s question about the charge against Jesus they launch into the hideous chromaticism of Wäre dieser nicht ein Übeltäter (If he were not a malefactor) and the driving dactylic rhythms of überantwortet (delivered). Pilate responds and the crowd are off again Wir dürfen niemand töten (It is not lawful for us to put any man to death), this time with the urgent, semiquaver accompaniment of violins and flutes first heard in Jesum von Nazareth.

The ensuing dialogue between the procurator and Jesus is remarkable for the latter’s brief melodic flourish on the word ‘kämpfen’. The rolling bass quavers in the next chorale Ach, grösser König (Ah, great king) emphasize Christ’s majesty. Pilate returns to the crowd, who shout for the robber, Barabbas. The Evangelist immediately enters on a top A and describes the scourging of Jesus in an immense, galloping sequence above a jagged bass.

The succeeding bass arioso Betrachte, meine Seele (Consider, my soul) is wonderfully scored for two viole d’amore, instruments with sympathetic as well as playing strings, and lute, a combination of surpassing intimacy and sweetness. The viole then accompany the tenor in Erwäge (Ponder), an aria in which Christ’s blood-stained back is compared with the rainbow which appeared after the Flood.

The soldiers hail Jesus mockingly (Sei gegrüsset) and the woodwind add their falling semiquavers of obeisance. He is presented to the crowd, who yell ‘Kreuzige!’ in a terrifying sequence of interwoven motifs – drawn-out, dissonant major sevenths and semitones, and drumming quavers followed by two semiquavers. Pilate says he can find no fault with the accused. The chief priests, in a pompous fugue, remind him that Jesus is guilty of blasphemy under their law: Wir haben ein Gesetz (We have a law). Pilate’s desire to release (losliesse) the prisoner  is touchingly portrayed at the end of the next recitative.

We have reached the core of the work, a radiant E major chorale Durch dein Gefängnis in which the slavery (Knechtschaft) of sin is chromatically illustrated. It is the centre of a gigantic musical palindrome stretching over 26 numbers and linking movements which are musically very similar, and in some cases almost identical. The listener will get an inkling of it from the subsequent chorus, Lässest du diesen los (If thou let this man go), whose counterpart is
Wir haben ein Gesetz (We have a law).

After Jesus is led away to be crucified, Eilt, ihr angefocht’nen Seelen (Hurry, you tormented souls), an aria for bass with string accompaniment, opens with a powerful rising, unison scale in the top three parts and, when the continuo takes up the same figure, offbeat entries for violins and violas create the effect of duple over triple time. The rhythm becomes even more complex with the choral interjections of Wohin?, to which the soloist replies, nach Golgatha!

Jesus having been crucified, the soldiers cast lots for his robe in a lengthy fugal chorus, Lasset uns den nicht zerteilen (Let us not rend it), in which the rattling of dice is suggested by the ceaseless semiquavers of the cello continuo.

The phrase Es ist vollbracht forms the basis for the ensuing countertenor aria of the same name. At this key point Bach introduces a viola da gamba to heighten the pathos. But he also reminds us of the meaning of Christ’s suffering by inserting a D major fanfare accompanied by strings,
Der Held aus Juda (The hero from Judah).

The death of Jesus is followed by a serene, warm, sinuous chorale fantasia for bass and chorus, Mein teurer Heiland, in which the soloist answers his own questions about the redemptive power of the Cross with the word ‘Ja!’,
while the chorus prays for the sinner’s own redemption at death.

Bach takes two more verses from St Matthew’s Gospel for the rending of the temple veil and the earthquake. The strings tremble on demisemiquavers in the succeeding tenor arioso, Mein Herz (My heart), which at the end modulates deliciously from D minor to C major. In this and the accompanying aria, Zerfliesse, mein Herz (Dissolve, my heart), Bach broadens his orchestral palette again, this time with oboes da caccia. In the second piece they weave
wonderfully intricate patterns with flutes, soprano solo and continuo.

The composer sets the remaining 12 verses of the Gospel text in two long passages of recitative separated by a chorale, O hilf, Christe, Gottes Sohn
(Oh help us, Christ, God’s Son) to the same melody as that at the start of Part Two.

The final chorus, Ruht wohl, is a great sarabande in rondo form (A, B1, A, B2, A). The laying to rest is conveyed by falling instrumental arpeggios and a vertiginous soprano descent over nearly two octaves. In the first of the
‘B’ sections, the upper instruments play the arpeggios above repeated notes in the bass; in the second, the roles are reversed and only the top three voices of the chorus sing.

After such a lullaby, what more can be said? Bach looks to the bedrock of Lutheran music, the chorale, for the answer. Switching from C minor to the relative major of E flat, he sets the third verse of Martin Schalling’s hymn for the dying. The first part is a tender depiction of the dead Christian’s waiting in hope for the Last Trump. The second is the soul’s fervent plea to see the Saviour face to face and praise Him eternally. Bach concludes his first Leipzig Passion with a ringing affirmation of Christ’s victory over death.

With acknowledgments to Simon Scott Plummer, who kindly supplied the Programme Notes. 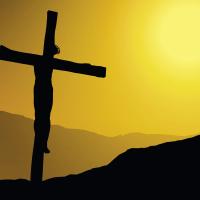