A Sacred Oratorio for Soprano, Alto, Tenor and Bass soloists, Chorus and Orchestra

George Frideric Handel was born in the same year as J.S. Bach and Domenico Scarlatti. His father, the son of a blacksmith and a pastor’s daughter, became a distinguished physician and acquired a coat of arms (two boys holding medical flasks), which can be seen today beneath Handel’s monument in Westminster Abbey.

Handel’s early studies in organ and composition were within his native Lutheran church traditions but he discovered opera on a trip to Hamburg in 1703 to meet a young composer called Mattheson (whose sword missed killing Handel by a button’s width during a spat in the pit at a performance of Cleopatra). From 1706-10, Handel studied in Rome and then took up a position in the court of the Elector of Hanover (the future King of England, George I). He was granted leave to make a trip to London later that year and once again immersed himself in opera. At that time in London, opera was all the rage and attracting extraordinary talents – including the greatest castrati singers of the day. Handel composed Rinaldo, produced to much acclaim in 1711, and it was little wonder that, after a brief trip back to Hanover, Handel asked for further leave – which he happened to extend until his death some forty-eight years later.

Operas such as Julius Caesar, Ariodante and Serse made Handel rich as well as famous, his orchestral music was much performed and he made many personal appearances playing organ and harpsichord, astonishing his audiences with his powers of dexterity and improvisation. Although his fortunes fluctuated wildly, Handel was greatly admired and continued to write and perform even when he lost his sight in the last few years of his life. When he died at the relatively grand age of 74 in 1759, his passing was mourned across the entire country as a truly national loss.

Handel the Man
In an era when the elite social circles in which he operated were small and gossipy and the London press was even more intrusive and vicious than our modern-day tabloids, it is extraordinary that Handel managed to keep his private life so private. Much has been read into this but little sustained. What is known is that ‘Mr. Hendel’ presented as a large and somewhat broody man who “when he did smile, it was his sire the sun bursting out of a black cloud.”  He was well known for his love of food and drink and he cut the satirical artist Goupy out of his will for publishing a cartoon, entitled The Charming Brute, showing the composer with the face of a pig, sitting weightily astride a barrel while playing the organ, above a caption “I am myself alone”. Other records portray a man who was blunt, explosively temperamental and hugely ambitious but a witty and genial presence and a great benefactor and philanthropist.

Writing Messiah
Contemporary correspondence of the time suggests that Handel suffered some kind of crisis (a stroke or acute depression, described as a ‘paraletick disorder’) in the months leading up to his composition of Messiah. For almost thirty years he had enjoyed unrivalled success and fame in London, as a formidable organist and harpsichord player and the foremost composer-producer of Italianate opera. But now that this form of ‘foreign’ entertainment had lost favour with the press and public alike, he was facing artistic and financial ruin.

His friends were concerned, including Shakespeare scholar and sometime poet Charles Jennens, who had recently collaborated with Handel in his experiments with the new English ‘oratorio’ form – resulting in Saul and Israel in Egypt to mixed reviews. Handel turned back to opera but with disastrous box-office results. Jennens wrote in his journal “Handel says he will do nothing next winter but I hope I shall persuade him to set out another Scripture collection I have made for him, and perform it for his own benefit in Passion week… The subject is Messiah.”

Jennens must, therefore, have been delighted to see his friend inspired to return to old work habits – eschewing food, coffee house, pipe and drink (all of which he was inordinately fond of) and foregoing sleep whilst writing in a ‘white heat’ of concentration. After only three weeks he had completed the entire work and was ready to stage a series of concerts in Ireland, where he had been invited by the Lord Lieutenant for the following spring.

An extra 100 people squeezed themselves into Neal’s Music Hall in Dublin on 13th April 1742 (by abandoning their hooped skirts and swords) to witness the first performance
of Messiah – the oratorio that has become a cherished mainstay of the choral
repertoire ever since.

Music of Messiah
Jennens provided Handel with a selection of biblical extracts that narrate the promise of Redemption through the Life and Passion of Christ, in three distinct parts: the prophecy of God’s plan to redeem mankind through the coming of the Messiah; the suffering and sacrifice of Christ in the face of man’s cruelty and rejection, and a hymn of thanksgiving for Christ’s eventual victory over Death. Although Messiah resembles the great Lutheran Passions of contemporaries such as Schütz and Bach, it does not provide a direct narrative but rather the biblical excerpts offer a more meditative commentary on the redemptive nature of Christ’s earthly mission and sacrifice for mankind.

The legendary swiftness with which Handel composed this work can be partially explained by his borrowings from his own earlier compositions – by no means an unusual practice in his day. For example, the melodies used in the two choruses And He shall purify and His yoke is easy were taken from an Italian chamber duet he had written earlier in 1741. Another secular duet provided material for the famous chorus For unto us a Child is born, and All we like sheep borrows its wandering phrases, imitating the calls of lost sheep, from the same duet. In each case, however, Handel
carefully reworks his themes and the light-heartedness of the secular originals is given new and appropriate depth.

The writing for soloists is, likewise, at once full of dramatic colour and profound emotions – God’s shaking of the heavens and the earth, the sudden and surprising appearance of angels to the shepherds, the tenderness with which Christ cares for His ‘flock’, the sorrow of Christ rejected, the raging of His persecutors and the calm certainty that redemption is secured for us by Christ’s sacrifice – all are vividly conveyed in Handel’s masterful writing.

The consistent beauty and nobility of the music itself, the high proportion of music provided for the choir, the graceful and relatively simple nature of the arias and the pared-down orchestral scoring (the strings and continuo of the Dublin performance only augmented, though with wonderful effect, by oboes, trumpets and drums for his London performances) have made Messiah one of the most frequently performed and beloved of all oratorios.

To Stand or not to Stand?
King George II had a well known passion for music and opera but owing to the fractious nature of the King’s relationship with his father (George I), he had begun by despising his father’s favourite composer. It was not until Handel composed some anthems for George II’s own coronation that the King became a patron as well as an admirer. His most famous tribute to the composer, however, is believed by some Handel scholars nowadays to be apocryphal. The tradition in England of standing for the Hallelujah chorus is said to have come from the moment when the King was sufficiently moved to rise from his seat and, of course, everyone else had to follow his example.

Please feel free to stand at tonight’s performance of the chorus if you wish!

On 16th May 1751, Handel began to put on annual productions of Messiah in the chapel of London’s Foundling Hospital. This entailed yet more revisions of the work by the composer to suit the performers available at the time and here included the use of the chapel’s outstanding boy trebles for some solos as well as for the top line of the chorus. These concerts were also unusual in that the chapel was the only consecrated space that Handel ever used for his own Messiah performances. There is very little reportage to support the notion that Handel intended the work to be evangelical but a great deal of evidence that he wanted to enable its audiences to support charitable work for the destitute and needy. 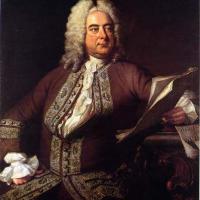