for orchestra and chorus

Britten was no stranger to the sea: he lived on the Suffolk coast virtually all his life. “I feel at home in this kind of scenery … the marshes, the small villages, the fishermen in their boats – that is all part of my life without which I cannot seem to do.   I cannot work and live without roots.”    When his opera Peter Grimes was first performed in 1945 it instantly became the most successful English opera since Purcell’s Dido and Aeneas.

The sea is a constant presence in the opera, which is set in the Borough, a Suffolk fishing village, where the fisherman Peter Grimes is hounded from the community after his two apprentice boys die in mysterious circumstances.  The opera can be seen as an allegory of how society deals with misfits – a theme which appealed to Britten’s own sense of alienation.  In the opera, the interludes are played with the curtain down and are almost self-contained;  to make them into concert pieces, only minor editing by the
composer was required.

Sea Interlude 1:  Dawn  (Prelude to Act 1) : The opera starts with an indoor Prologue:  this interlude then introduces the sea, the North Sea of course.  Britten divides the orchestra into high, middle and low registers:  the high violins and flutes depict the seagulls;  clarinets, violas and harp arpeggios suggest the wind, and the brass and lower strings represent the swell of the sea with a chorale-like melody.  This interlude runs into the first chorus:

Working Chorus:  Song of the Fishermen  (Beginning of Act 1) : The orchestral material heard in ‘Dawn’ appears again; against it we hear this chorus, the voices are either in unison (or octaves), or in simple two-part harmony.

Sea Interlude 2:   Sunday Morning  (Prelude to Act II): The sky is now blue, the waves are stronger, the sea-birds louder – and the church bells ring out, not from the percussion section but imaginatively suggested by overlapping pairs of French horns.  Against this, the piccolo and the smallest (E flat) clarinet, followed by the violins, play a spiky melody.  A descending clarinet scale leads into a melody in the lower strings with a playful flute embellishment;  this builds to a fanfare climax with high trumpet scales before subsiding.

Sea Interlude 3:  Moonlight  (Prelude to Act III): The music radiates the stillness of the cold moon.  The waters are almost calm.  This interlude is the emotional core of the opera, when after the death of the second apprentice boy, Grimes knows that his time is up.  Low instruments – cellos and basses, bassoons and contrabassoon – play a gentle but insistent surge;  against this there is a spiky, high-set figure in a different time, played by flute and harp.  At the climax the whole orchestra takes up the initial figure while the piccolo and xylophone join the flutes and harp.

Sea Interlude 4:  Storm: In the opera this occurs in Act 1, between Scenes 1 and 2 and provides some truly terrifying moments when we are, as it were, in the eye of the storm.  The ferocious start is dominated by the timpani, whilst the uneasiness derives from the constant shifting in the number of beats per bar.  The second theme is a chromatic rising figure played on trombones and trumpets, with storm-force winds building up in the strings.  Eventually calm ensues, and the music goes down to pianissimo but remains full of pent-up energy;  there is a low pedal for basses, bass drum and contrabassoon before the final flourish.  Britten is portraying not simply bad weather but the tension between the outcast Grimes and the rest of the Borough. 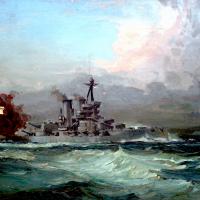