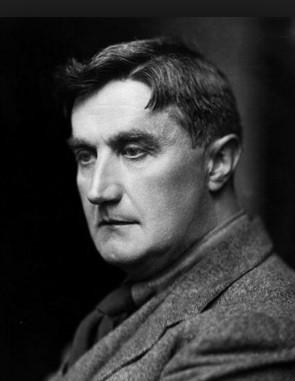 Ralph Vaughan Williams is perhaps best known as a composer with a distinctly English musical voice, drawing on the traditions of folk song as well as early English church music. Having studied composition with Hubert Parry and later Charles Villiers Stanford at the Royal College of Music and with Charles Wood at Trinity College, Cambridge, he started his professional life as an organist in London.

The pronounced atheism of his years at Cambridge, later turning into a less rigid sceptical agnosticism, never stood in the way of his love for religious music, text and the architecture of Gothic cathedrals and their acoustics. In his search to find his own musical voice, able to reflect a ‘sense of musical citizenship’, he built on this heritage. But he also looked elsewhere for inspiration.

From 1903 onwards he travelled the country to collect folk songs sung to him by people still familiar with the oral tradition, a project that would have a profound influence on his own music. He recorded and published hundreds of folk songs and arranged many of them so that they could be sung in schools and thus kept alive.

Vaughan Williams was particularly intrigued by tunes based on modes rather than tonal scales, a characteristic shared by folk song and English church music. The composer adopted modal harmonies as a distinctive feature of his own style. A commission to edit a new version of The English Hymnal became another lasting influence on his musical development.

Between 1904 and 1906 he immersed himself in the choral music of the Tudor period and came to fully appreciate the polyphonic mastery of composers such as Byrd and Tallis. A psalm tune he included in the Hymnal would later inspire him to write one of his best-loved pieces, Fantasia on a Theme by Thomas Tallis (1910).

Vaughan Williams’ life-long project of (re-)establishing a ‘national music’ that would no longer look abroad for musical models but capture the spirit of the nation was neither a sign of chauvinism nor of a nostalgic longing for a bygone rural England. The composer’s ambition to find an apt musical expression for the life and culture of Britain grew out of his understanding of music: he was convinced that music has the potential to be a force for national and social cohesion when it builds on the traditions of the past and takes this heritage as the basis for the development of a new, modern idiom.

National music in this sense would not present a preconceived model for each individual composer. Instead, heritage and authentic self-expression were to go hand in hand. ‘In former times’, he wrote in The Vocalist in 1902, ‘musical England came to grief by trying to be foreign; no less surely shall we now fail through trying to be English. It is useless to invent a style and then model individual utterances upon it. The national English style must be modelled on the personal style of English musicians’.

In order to develop his own individual style the young Vaughan Williams travelled to Berlin to study with Max Bruch, and in 1907 he went to Paris for ‘a little French polish’ from Maurice Ravel, an intense study period from which he returned invigorated and inspired by the Impressionist school of music. Throughout his long life as a composer he remained open to diverse influences and absorbed new developments while at the same time composing quintessentially English music.

Vaughan Williams’ outlook was humanistic and democratic, with a strong element of social conscience, and he regarded music as ‘the art of the common man’. In his view ‘the composer must not shut himself up and think about art, he must live with his fellows and make his art an expression of the whole life of the community’. He wanted music to be filled with ‘real feeling and real life’, and life to be filled with music – hence his focus on amateur music-making.

He conducted professional and amateur choirs alike, contributed to choir festivals, directed the Leith Hill Festival for fifty years and was president of the English Folk Dance and Song Society. His educational work stretched from academic teaching at the Royal College of Music to courses at Morley College for Working Men and Women, as it was then known.

These wide-ranging activities all contributed to his aim of building a musical community. Vocal music was particularly close to his heart: his first published composition in 1902 was a song, Linden Lea, and A Sea Symphony (premiered in 1910), his first work in the symphonic genre, was a choral symphony.